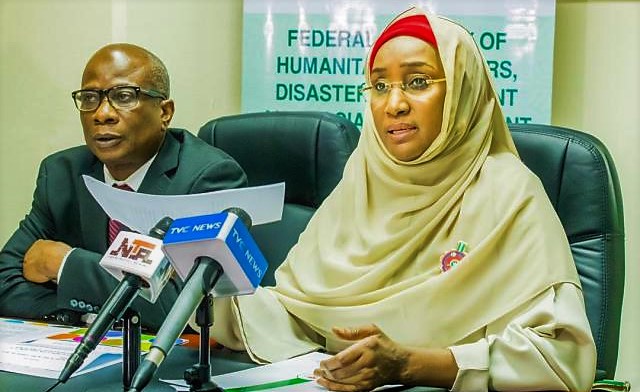 Determined to address youth restiveness and encourage self-reliance, Federal Government has concluded plans to empower no fewer than 1,850 youths across the six geo-political zones to benefit from the “Life Skills and Entrepreneurship Development training on Mobile Money Agents”.

The Minister of Humanitarian Affairs, Disaster Management and Social Development, Sadiya Umar Faruk stated this while declaring open the training for the selected youths from North West zones in Kano.

Sadiya Faruk explained that Federal government introduced the program in 2020 as part of the vision by the President Muhammadu Buhari’s administration to lift 100 million Nigerians out of poverty line.

According to her, “Federal Government is paying much attention to promoting the plight of the poor and vulnerable in the country and that is the reason behind the decision to initiate the National Social Investment Programme (NSIP) as a strategy for enhancing social inclusion. The NSIP is adjudged as the largest social protection programme in Africa with over $1billion earmarked annually to cause positive changes in the lives of the poorest and most vulnerable in the country”.

She added that since its introduction in 2016, the programme has impacted positively on the lives of the poor and vulnerable in Nigeria with over 12 million households have benefitted from NSIP interventions.

Hotpen reports that, the Mobile Money Agents’ Training Programme was designed to empower unemployed youths and develop their competences to operate as registered mobile money agents.

The minister stated further that, the training holding today will enable target beneficiaries to meet the minimum technical and business requirements for becoming mobile money agents and enhance their entrepreneurial competences to successfully start and manage mobile money businesses.

Said she:-“Upon completion of the training, the target beneficiaries will be registered with the Shared Agency Network Expansion Facility, SANEF as Mobile Money Agents and will be provided with Start-up kits that include a Point-of-Sale (POS) Machine, Fingerprint Scanner and Furniture (chairs, tables and umbrellas) as well as a modest capital of N20,000.00″.

Ganduje represented by the Commissioner of Education, Muhammad Sanusi-Kiru said youth empowerment was among the priorities of the state government under his administration.

The minister later made a symbolic presentation of POS machines, Umbrellas, Finger print scanners, furniture and a twenty thousand Naira capital to some of the beneficiaries.