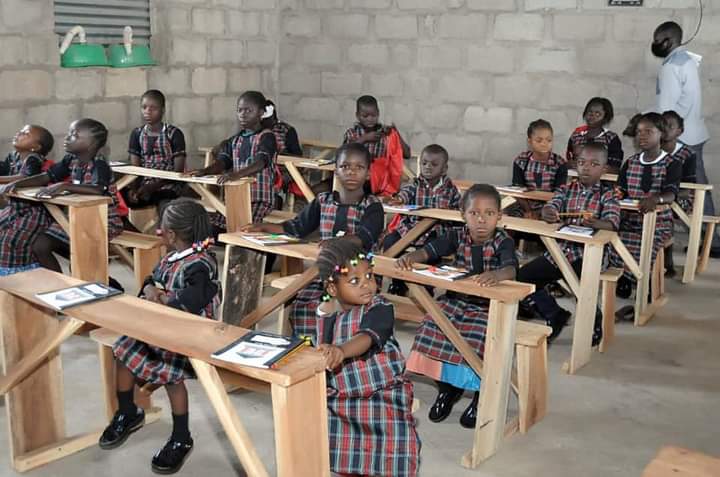 SPECIAL REPORT: How Insecurity Is Taking Toll On Schools as NGO Builds Learning Centre for 150 IDPs in Kaduna

HOTPEN – Activities of Bandit-terrorists and fundamentalists Jihadist militants are taking a toll on education, highlighting a worrying development that led to the disruption of academic activities in some parts of Southern Kaduna as several schools have been closed indefinitely.

The kidnap for ransom crisis has negatively affected education and created a business enterprise out of the abduction meted out against communities and led to the displacement of thousands of students.

This endangered rights to education for the children and pose a significant threat to achieving Goal 4, (Quality Education), Goal 16, (Peace, Justice and Strong Institutions) as well as Goal 1, (No Poverty) as part of the United Nation’s effort to ensure that all people enjoy prosperity and peace by 2030.

HotPen finding revealed that parents in the affected security-challenged communities who beat all odds to send their children to school are left with no option but to stop their wards from schooling for fear of being kidnapped.

Data released from the National Bureau of Statistics showed that over 10.5 million children in Nigeria drop out of school where 60 percent are in the north, and the violent attacks and abduction of students further aggravate the situation with brutal consequences on Internally Displaced Persons (IDPs).

HotPen learned that the mass attacks on schools in Southern Kaduna terminated the education of thousands of children while putting their future in a degrading and horrific bleak.

The chairman, Birnin Gwari Emirate Progressive Union Ishaq Usman Kasai told HotPen that “the incessant terror attacks by bandit-terrorists forced us to stop sending our children to school, adding that most of the schools have now been converted to the operational bases by security agencies”.

NECO, WAEC, NAPTEB, AND OTHER EXAMMINATION BODIES MAY LIKELY CLOSE ALL CENTRES IN BIRNIN GWARI

Checks by HotPen revealed a scary tale where Rama, Zaman Daji, Dagara, Bugar as well as Government Girls Junior and Senior Secondary School Bagoma in Birnin Gwari examinations centers have been closed since March 16, 2021, following an attack on UBE Primary School Rama and the subsequent directives to closed all Schools in Birnin Gwari and Kajuru local government areas by Kaduna State Government.

According to Ishaq Usman Kasai, “All the centers of the National Examination Council (NECO), West African Senior Secondary School Examination (WASSSE), and the Joint Admission and Matriculation Examination did not hold examination since 2019 in Birnin Gwari Local Government area”.

He said, “this is evidence enough to send a strong message to the global community that the aggravating security issues within this axis require urgent attention”. He added that ” although there was no formal announcement that all the examination bodies is closed in our communities but their action is sending a signal to this respect, though we understand it’s in the interest of the general public”.

HOUSE OF JUSTICE BUILT LEARNING CENTRE FOR OVER 150 IDPs CHILDREN

A Non-Governmental Organization, the House of Justice in collaboration with the Southern Kaduna Resilience Fund Project has built a school for the children of Internally Displaced Persons to provide educational support and cushion the effect of the cruel consequences of terror attacks on schools in Kaduna State.

The school, which accommodates more than 150 IDPs is built in collaboration with the Southern Kaduna Resilience Funds Project and other philanthropists among a host of others that provides technical and material support.

Speaking to HotPen, the Chief Executive Officer, House of Justice, Barrister Gloria Mabeim said the school was built to provide a conducive study environment for the displaced children in Southern Kaduna.

Mrs Gloria noted that when schools are targeted or attacked, the damage and the attendant consequences can be major to the general public not only the children and the parents affected. She said educating the children is the duty of all and sundry not only the governments at various levels.

”We believe that every child deserves a healthy and safe environment” and that is why the organization has partnered with other NGOs in providing educational support and services to the children”.

“In the House of Justice, Instead of talking, we take action on any problem that is taking a toll on society within the ambit of our core objectives”.

Kaduna State former Commissioner of Education, Mr. Maitaimaki Tom Maiyashi expressed sadness over the development in Kaduna state and Nigeria by extension. He said education was profoundly affected as a result of the targeted terror attacks on children and school facilities.

Mr. Maitaimaki further said that education as the aggregate of all processes through which a child develops abilities, attitudes, and other forms of behavior that is of positive value to society and the country at large shouldn’t be neglected in such a way that terrorists could easily attack and destroy its facilities.

He added that “Section 27 of the Child Rights Act prohibits the abduction of children.

“Having ratified the African Charter on the Rights and Welfare of the Child and the United Nations Convention on the Rights of the Child, Kaduna State, and Nigeria as a sovereign nation must take appropriate measures to prevent the abduction of children and the attacks on educational facilities”.

According to him, this is the only way Kaduna State Government and Nigeria will guarantee children’s right to education.

This story was supported by Journalists for Christ through World Association of Christian Communication (WACC) and Bread for the World – German Protestant Agency for Diaconia and Development.