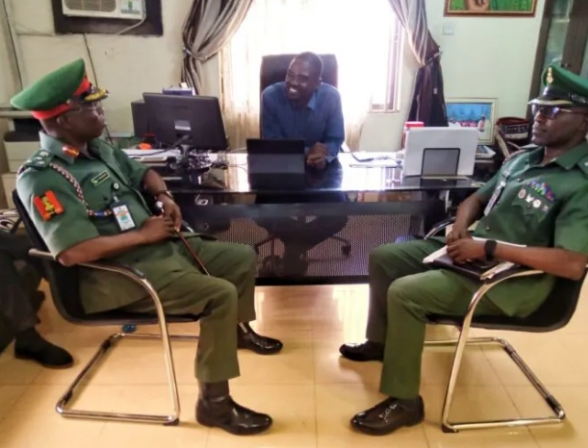 This is just as the Inspector General of Police, Usman Alkali Baba, through the Force Public Relations Officer, CSP Olumuyiwa Adejobi, also commiserated with the PRNigeria Editor-in-Chief over Sheikh Agaka’s death.

The prominent Islamic scholar and Chief Imam of Agaka Community in Ilorin Emirate of Kwara State, died at a private hospital, after a brief illness, early this month. He was 77.

Nwachukwu, offered his condolence when he led a delegation of army officers to visit Mr. Shuaib, at his PRNigeria Head Office in Abuja.

The Army Spokesperson, expressed shock over the demise of Sheikh Abdulhameed Agaka.

He described the loss of the father of PRNigeria publisher as a ‘monumental tragedy’ that must have brought huge emotional trauma and pain to his immediate family, friends, the people of Agaka town and even Kwara State.

He however, urged his host, Alh. Shuaib, to take solace in the reality that his departed father lived a fulfilled and accomplished life, worthy of emulation.

Gen. Nwachukwu, while also offering the condolences and greetings of the Chief of Army Staff, COAS, Lt. Gen. Faruq Yahaya, during the visit, applauded the efforts of PRNigeria in positively projecting the image of the Nigerian army and military, in general.

“We appreciate all what your PRNigeria has been doing for the Nigerian army. And the army, in return, sees you as a partner in progress,” he said.

In a letter of condolence signed by CSP Adejobi, the IGP, Mr. Alkali Baba, assured Mall. Yushau Shuaib that the Nigeria Police Force stands by him and his family at this period of grief.

He prayed that Sheikh Agaka’s soul rests in peace, and may Jannatul Firdaus be his final abode.

“He left when the country needed him the most as a key propagator of religious tolerance. He had made his mark in impacting knowledge of tolerance between and among people he had come in contact with in the course of his ministry,” IGP Baba said.