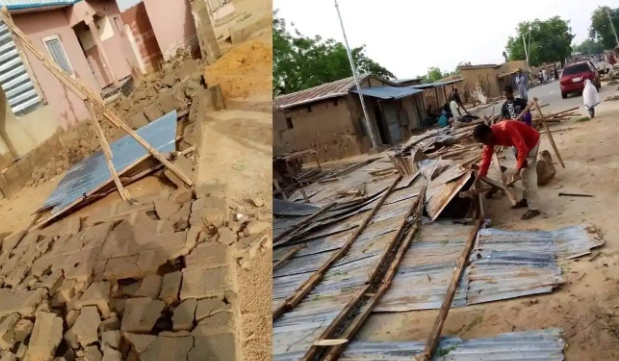 HOTPEN – The Jigawa State Emergency Management Agency (SEMA), has said that at least six persons were killed by a windstorm in Kafin Hausa Local Government Area of the state.

The Executive Secretary of the agency, Alhaji Yusuf Sani, confirmed this to the News Agency of Nigeria (NAN) on Wednesday in Dutse.

Yusuf said about 65 others sustained various degrees of injury, while yet-to-be- ascertained number of houses were destroyed by the disaster which occurred on Tuesday.

He explained that displaced persons were asked to stay with their relatives pending when a temporary shelter would be provided for them by the agency.

The executive secretary added that the personnel of the agency and those of the National Emergency Management Agency (NEMA), are currently in the area assessing the level of damage for intervention.

“Yes, we’ve received a report about the incident and six persons los thier lives and about 65 others injured and taken to hospital for medical attention.

“But I cannot give you the number of houses destroyed now, because as I’m taking you our personnel and that of NEMA are in the area assessing the level of damage”.

“And who those are displaced were asked to stay with their relatives before we provide shelter for them as the incident happened yesterday,” the executive secretary added.

Umar said the incident occurred as a result of heavy downpour, accompanied with windstorm, which began at about 6:30 p.m.

He explained that the Chairman of the Council, Alhaji Muhammad Saminu, has visited the injured victims at Kafin Hausa General Hospital.

The information officer added that Saminu, who sympathised with the victims, called on the agencies concerned to urgently assist them.

According to him, the chairman pledged the council’s commitment to assist the victims.
Muhammad said most of the injured victims were treated and discharged.

He added that the council has visited and condoled with the families of the deceased.