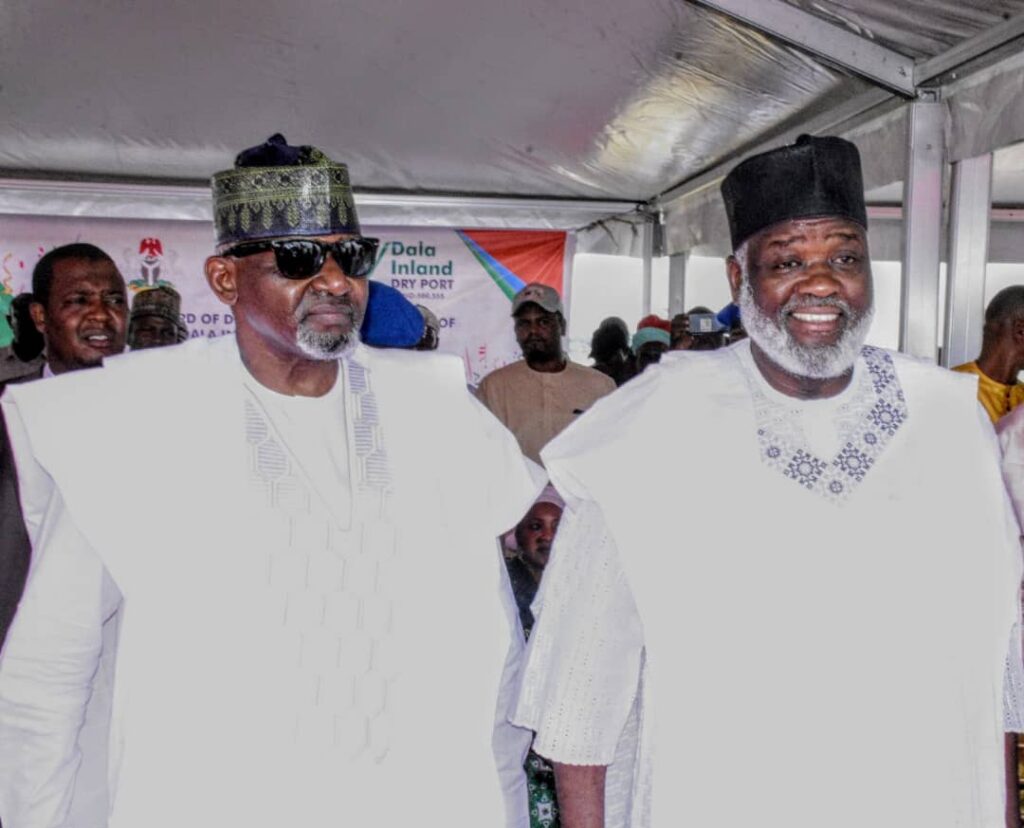 HOTPEN – Kano State Government says it has contributed about two point five billion naira for the construction of access roads,perimeter fencing,electricity and other social amenities to the Dala Inland Dry Port project in order to ensure its speedy completion.

Kano State Acting Governor Dr.Nasiru Yusuf Gawuna who disclosed this on friday when Minister of Transportation Alh.Mu’azu Jaji Sambo paid a familiarisation visit to Dry Port’s Office at Zawaciki in Kumbotso Local Government Area of the State also said that the State Government made sure that the project becomes a reality through provision of enabling environment because it would lead to economic development not only for Kano and its neighbouring States but also for Niger,Cameroon and Chad Republics.

Gawuna while reading the speech of the Governor further said Kano is the commercial and investment nerve Centre of Northern Nigeria and the largest non oil and gas economy in the country with a GDP of approximately twelve billion US dollars making it potentially viable for investors therefore the project is meant for harnessing the resource potentials of the State towards improving the livelihood of the teeming populace. Adding that this becomes necessary given the fact that the crude oil revenue on which the country depends has tremendously dropped.

” Dala Inland Dry Port was initiated to act as a catalyst to improve trade flows,boost Inland trading and revitalise export of agricultural products leading to multi product economy he said”.

In his address the Minister of Transportation, Engr.Jaji Sambo while declaring the Dala Inland Dry Port as Port of Origin and Destination said Kano with sizeable number of textiles,agro allied and several manufacturing industries not only suited but most qualified for an Inland dry port.

According to him the Inland Dry Port was conceived as part of the Federal Government’s port reform programme designed to decongest the sea ports while also taking shipping and port services closer to importers and exporters in the hinterland,however Dala Inland Dry Port that started many years ago has now come fruition.

The Minister therefore called on the Business Community and Investors to take full advantage of facility for the import and export of their cargoes.

In his remarks, the Chairman of Dala Inland Dry Port, Alh.Abubakar Sahabo Bawuro explained that the board resolved from the inception to develop a facility that would function as an efficient digital and regulatory compliant port that would minimise contact between cargo and man.

He added that the position of Dala Inland Dry Port is unique and that caused its introduction in the linkage made by the Federal Government in the standard gauge railway line to link Maradi in Niger Republic through the port from Lagos.

“At the moment, the narrow gauge railway line is fully connected the port and tested. It can provide the services required from Lagos to Kano and the second leg to destinations in Niger Republic can be completed by road he said”.

He however commended the Federal Government and Kano State Governor Dr.Abdullahi Umar Ganduje for their support towards making the project a reality.