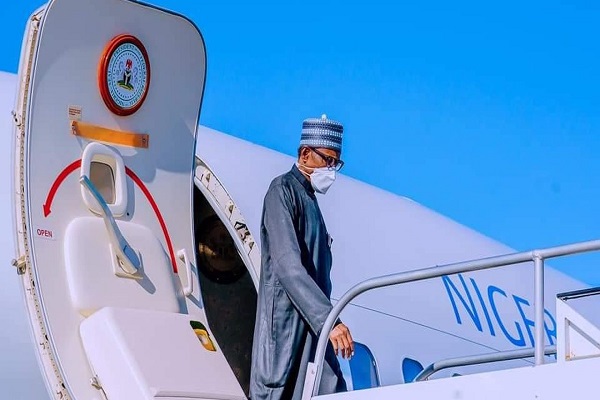 HOTPEN – President Muhammadu Buhari on Friday returned to Abuja after a six-day official visit to Seoul, the capital of South Korea, for the First World Bio Summit 2022.

The President arrived at the Presidential Wing of the Nnamdi Azikiwe International Airport, Abuja, around 6am.

He was received by two governors, senior government officials and security chiefs.

They included the governors of Katsina and Niger States; Hon. Aminu Bello Masari and Alhaji Abubakar Sani Bello; Minister of the Federal Capital Territory (FCT), Mohammed Musa Bello, and the Chief of Staff to the President, Professor Ibrahim Gambari.

Others were the Inspector-General of Police (IPG), Usman Alkali Baba; the Director-General of the Department of State Service (DSS), Yusuf Magaji Bichi and some other senior military and other security officials.

While in Seoul, President Buhari delivered a statement to the Summit, held a number of high-powered consultations and bilateral/diplomatic meetings, including with the South Korean President, Yoon Suk-yeol, and the Speaker of the country’s National Assembly, Mr. Kim Jin-Pyo, in a separate meeting.

The President also used the opportunity to call for an expansion of the Nigeria/South Korea trade relations, during his meeting with Suk-yeol, met with some South Korean investors, witnessed the signing of a Memorandum of Understanding (MoU) for the rehabilitation of the Kaduna Refinery between the Nigerian National Petroleum Company Limited (NNPCL) and the Daewoo Group.
He also met with representatives of the Nigerian community in the country, charging them to be good ambassadors of Nigeria in the land of their sojourn.

Nigeria was invited to the Summit based on her selection with five other African countries by WHO and the European Union (EU) during the last EU-African Summit in Brussels, Belgium in February this year for mRNA technology transfer and Global Training Hub for Bio-manufacturing of vaccines on the African continent.