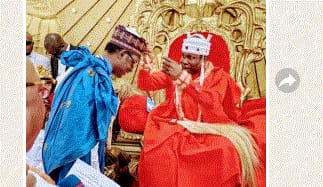 HOTPEN – Yobe State Governor Mai Mala has been conferred with the title of Taremobowei of Gbaramatu Kingdom in Delta State due to his determination of fostering national unity.

Governor Buni was described as a national bridge builder and asset to national unity and cohesion.

The King of Gbaramatu Kingdom said he was impressed by his achievements as a State Governor, a democrat per excellence and an apostle of developmental politics in the Nation.

The title was to spur Governor Buni to do more in promoting national unity for a united Nigeria at large.

Director General Press Affairs and Media, Mamman Mohammed announced the appointment of the Governor in a press statement issued to journalists on Friday.